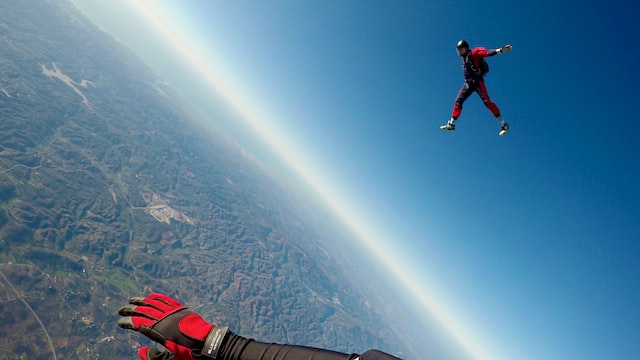 Best Marriage Proposals: That weekend Tom said he had a surprise for me, but he wouldn’t give me the smallest hint about what it could be, he just said that we would be leaving the house early in the morning, 8am, and asked me to wear comfortable and sporty clothes. I got all curious about what he had in mind and trusted him that it would be some thing fun and interesting. So we both were up and ready by 8, got into his truck and he started driving. I had no clue as to where we were going, but the music from the radio was nice and of course – I had good company! We soon were out of the city (we live in Indianapolis) and after an hour’s drive I finally realized where we were heading: Skydive Wayne country. I looked at Tim in total surprise You really mean we are gonna skydive?! –Yep! was his short answer. I thought that was soooo cool, yet still couldn’t imagine how cool. We got started, joined the team that was about to jump from the same plane and had a short lesson of how to jump, what to do etc. It was actually not that hard because each one of us was securely harnessed to a qualified instructor, known as a Tandem Master. The main thing about skydiving is that moment you have to dare let your feet leave the plane, then the adrenaline starts rushing in you veins, it’s a real good thriller. The view was spectacular and I just felt great. Not far from me I could see Tom taking the free fall with his Tandem Master and then their parachute opened. So did mine. We glided gently towards the ground where a new and final surprise waited for me: a large sign saying: Kate, will you marry me? Tom. Well, you can imagine the way I felt, there I was, between heaven and earth and my heart was beating even faster than before! Yes I shouted out to him, but the wind was so strong around us that he couldn’t hear. Only when we touched the ground could I run to him and say to face to face YES. Then he pulled out a diamond ring and in front of all the others whod taken that same sky dive, and in front of our guides and teacher, knelt down on one knee and told me how much he loved me and put the ring on my finger.